As publishers look for new sources of revenue, BuzzFeed has pushed hard into commerce, building a team of writers and assembling a team dubbed BuzzFeed Commerce focused on shopping.

Similar to other publishers including The New York Times-owned Wirecutter, PopSugar and Business Insider, BuzzFeed earns a portion of money from affiliate links in shopping posts.

Such revenue-minded content often blurs the line between editorial and business teams and it’s not always clear to readers if stories are paid for by brands, as a mishap on a series of BuzzFeed posts shows.

For example, a package of beauty products and a beach towel is $29.99 on Amazon but is 40% off with a coupon for Prime Day.

Here’s the catch. Maybelline paid BuzzFeed to come up with the products featured in these posts. But the products weren’t originally labelled as having been created for an advertiser.

In fact, BuzzFeed’s Prime Day posts looked like any other Shopping post with a short disclaimer at the top of the article informing readers that BuzzFeed may get a cut of the sale from affiliate links—a practice that is common among commerce publishers.

However, in this case, BuzzFeed worked with Maybelline to create the bundles of makeup and the posts did not include copy mentioning its partnership with Maybelline. According to one of the posts BuzzFeed published, “these super-fun collections have everything you need for the best summer ever.”

After Business Insider contacted BuzzFeed to ask if the posts were sponsored, BuzzFeed updated the posts and added a small line of copy below the Maybelline products that reads, “Just so you know, BuzzFeed was paid to help come up with this idea!” in two of the posts. The third post was updated to include the line, “Btw, we were paid to help create this!” 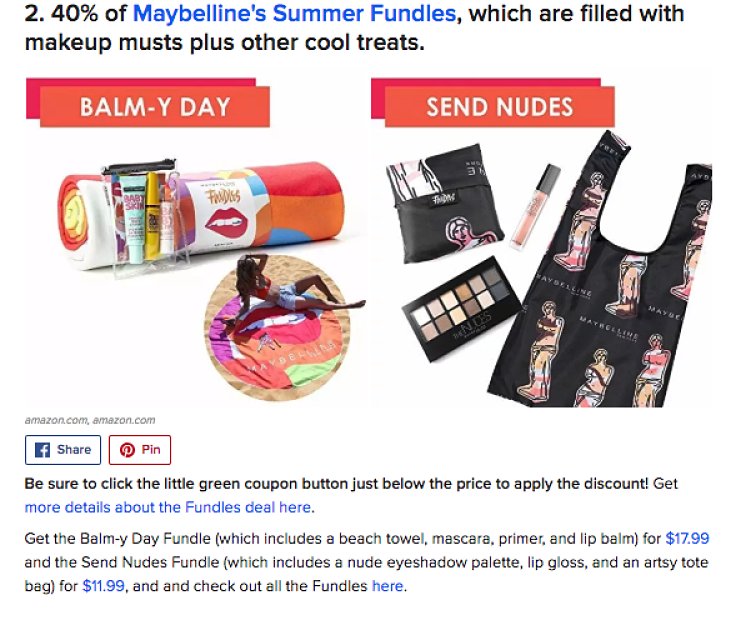 A separate post from BuzzFeed’s branded content arm that was published with Maybelline’s byline in June clearly labels the set of products as an advertisement.

Maybelline did not respond to a request for comment.

Mixing commerce with editorial is still new for publishers

The updated posts show how the distinction between editorial and revenue products can be murky for some publishers.

To be sure, BuzzFeed is far from the only publisher experimenting with mixing commerce with editorial content. Univision-owned The Inventory cranks out reviews and product guides and The New York Times reportedly purchased The Wirecutter for $30 million in 2016 to move deeper into ecommerce. Other publishers including New York Media and PopSugar are also betting on commerce to open up new forms of revenue.

Two-year-old BuzzFeed Commerce is headed up by Ben Kaufman, the former CEO of product startup Quirky, and now has 50 employees, according to a BuzzFeed spokesperson. BuzzFeed Product Labs is tasked with creating and marketing physical products like a line of Tasty-branded cookware for Walmart and A1-scented candles that smell like the meat sauce.

But unlike other publishers that separate editorial and business staff for ecommerce, BuzzFeed moved some of its teams together earlier this year. In January, BuzzFeed’s affiliate team shifted from working on the editorial side to working under the BuzzFeed Commerce group, which is its own division within the company, according to the spokesperson.

Coinbase has made yet another pioneering move in the regulatory morass that is cryptocurrency. The company today announced that its…

We previously covered the announcement of Centre and its first product USD Coin by Circle. Today, they have announced some…

The global cryptocurrency exchange based out of San Francisco, Coinbase, has announced the firm will now support Circle’s USDC stablecoin…

Coinbase has received approval from New York regulators to form a qualified custodial firm for cryptocurrencies.

Coinbase has secured approval from New York state regulators to act “as a limited purpose trust company” in the state,…